Passion or Pushiness? #ChooseToChallenge Assumptions About Women in Comms 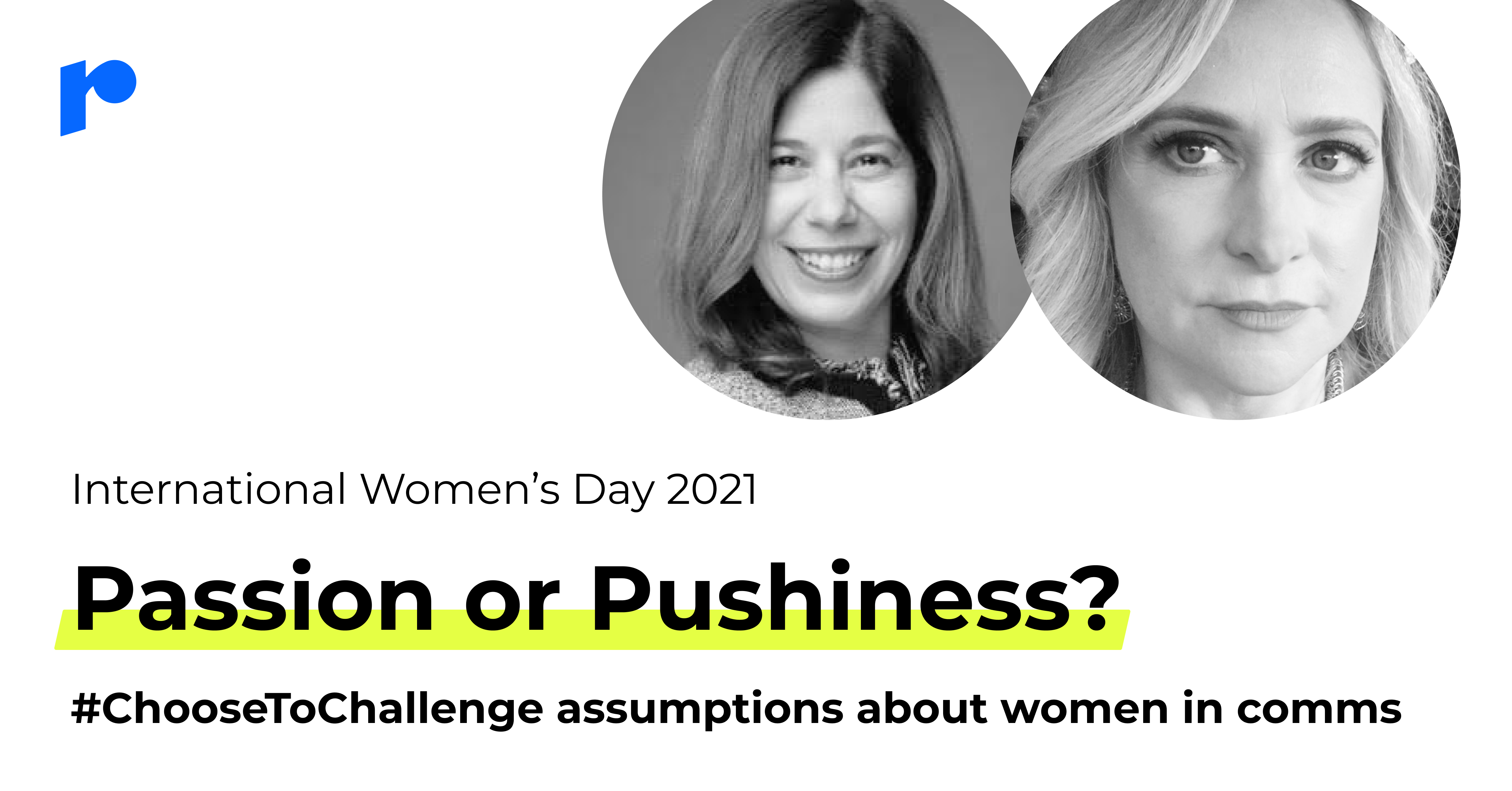 We spoke to some stand-out women in comms to highlight and challenge the gender biases at play within the comms workforce across a diverse range of sectors.

For this year’s International Women’s Day #ChooseToChallenge theme, we spoke to some stand-out women in comms to highlight and challenge the gender biases at play within the comms workforce across a diverse range of sectors.

So, what is comms?

In its simplest business terms, comms is the process of strategically sharing information both within and outside of an organisation or company. Comms teams are responsible for promoting effective communications, delivering messaging and campaigns and facilitating productive dialogue across stakeholders at all levels of seniority.

Comms roles span marketing, advertising, PR, HR and journalism disciplines, requiring a diverse skill set rooted in, yes, you guessed it, really effective communication. Suzanne Halls, Head of Communications and Public Affairs for the Office for Statistics Regulation, stresses that ‘every communications professional must be imaginative, determined, genuinely passionate, be able to work well with others, really want to make a difference, and work hard to make it happen’.

Why are there so many women working in comms?

As 2020 drew to a close and the world watched Joe Biden become the US presidential elect, there was a flurry of twists and turns, including but not limited to: Donald Trump’s golf-gate, the storming of the Capitol and the appointment of an all-female White House senior comms team.  Although the White House comms team is a stark example with a 100% female staff, the department is not alone in demonstrating the dominance of women within the comms industry. In VMAGROUP’s latest internal communications survey, Inside Insight, they identified that 67% of the UK communications workforce is female.

‘Traditionally, women have been attracted to communications roles for many reasons. Over the years the image of comms roles has been quite negative, fluctuating between ‘PR fluff’ to association with the dark arts or spin. This has meant comms has struggled with problems of perception or substance, highlighting the curious fact that comms struggles with its own comms. These could be reasons men might have been put off a comms career, but I’m glad to say I think that’s changing, especially as the image continues to evolve and comms roles become more digital.’

This curious double bind, of comms teams struggling with their own comms, illuminates one reason why men may be dissuaded from embarking on a career in the field. However, Women in Communications outline that whilst making up the majority of the workforce, women often embody more junior roles and lack representation within senior levels dominated by men, contributing to a whopping 13.6% gender pay gap. Although men may not be joining the industry within entry level roles, their influence is felt from the top down. This research exposes that whilst there is an increased volume of women in comms roles, there is a significant discrepancy between the number of women who are able to shatter the glass ceiling and secure leadership appointments often inhabited by men.

‘I’m in a lucky position, in that I can genuinely say that my experience of the Comms sector is that I have found it inclusive for both men and women. The industry stats, however, reveal a different story. Lots of women at lower levels of the managerial ladder, with fewer on the higher rungs. Is this another example of organisational leaders – often men – hiring in their own likeness? It would appear so’

In advancing the progression of those that reflect their likeness, men in leadership positions are potentially contributing to the erasure of women across all intersections from within higher comms ranks.

Are there stereotypes surrounding women in comms?

So, if women are unlikely to progress within the comms industry why do they make up two thirds of the field in the UK? The Atlantic points towards evidence that suggests women ‘tend to be more collaborative, participative, and pro-social than men are’. They elaborate that women have ‘only been found to talk more than men when they’re in collaborative settings and that women are ‘expected to be happier and to smile more than men’. Suzanne believes that, whilst comms professionals are required to collaborate with others and be passionate about their work, that ‘passion is mistaken for pushiness’ when it comes to women in the industry. She continues:

‘This industry attracts strong women because it’s a tough job, hard work and demands great stamina and determination to get things done. This industry is not glamorous, and any stereotyping is either out of date or was never true in the first place. The reality is full days, big responsibilities and tight deadlines, creating a challenging but very rewarding career’.

Whilst the research quoted in The Atlantic indicates why there are so many women in comms, with many of these observations closely mirroring Suzanne’s observations, these findings may actually contribute to stereotypes that hinder rather than help women seeking to grow within the comms arena. The Atlantic writes that ‘people will consider female leaders effective when they demonstrate both sensitivity and strength, but the male leaders need only to demonstrate strength’. Whilst women are often believed to possess the softer collaborative skills needed to excel within comms roles, the necessity to always exhibit strength rather than embracing vulnerability may prevent them from climbing the comms ladder.

Camilla expands that there are ‘stereotypes abound in every sector and I’m afraid that is true of the communications sector too’. Her advice? ‘Bring your whole self to work. Whether that be the clothes you wear, the beliefs you hold or the hobbies that you have. You do your finest work when you concentrate on the task in hand and do not have to worry about how others view you as an individual’.

How can businesses challenge assumptions and drive change?

Whilst the Biden Harris administration represents an ideal comms team scenario, with four of the seven appointees’ women of colour, the rest of the industry still has a lot of work to do to challenge assumptions, drive change and achieve true representation across the global landscape. Women in Communications cite that:

‘The 2019 PRCA census found that the PR and communications industry is 89% white, with only 4% of employees reporting a disability. By comparison, official figures report that 85.6% of the working population are white, whilst 19% of the working-age population have a disability, and over half of that demographic are in employment’.

Camilla believes that change will occur ‘when organisations become more representative of society at all levels. When women have role models and mentors, they thrive’. In other words, you cannot be what you cannot see. By advocating for women in leadership and creating space at the table, organisations can not only challenge assumptions surrounding the women in their comms department, but can disrupt the structures that enabled those assumptions to become embedded in the first place.

Thank you to all of the women in comms who contributed to this piece. Interested in reading more? Head to our recent interviews with Camilla and Suzanne.

William Lee on collaboration and pioneering

Sabrina Nicholson on listening and observing