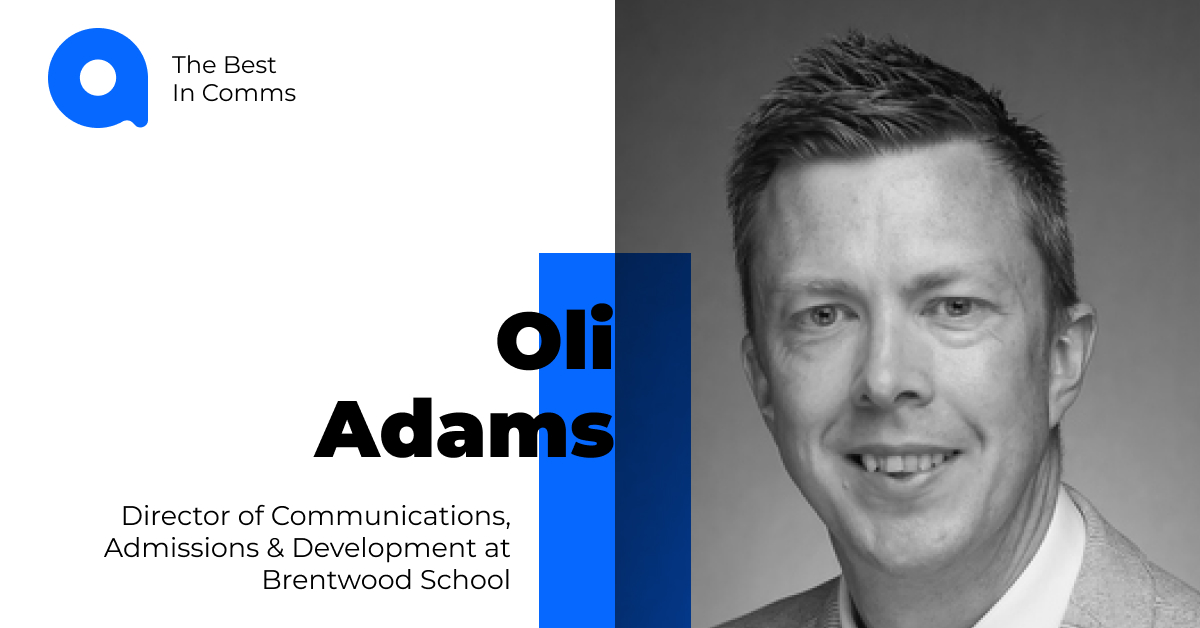 Oli Adams, Director of Communications, Admissions & Development at Brentwood School and Chair of the Association of Admissions, Marketing & Communications in Independent Schools, joins us to chat about what being a "people person" really means.

Happenstance, that's a nice word. I'll go for that as I had planned to join the diplomatic service with my modern languages degree but failed to get in twice. I got a job in sales and watched what the marketing team were doing behind the scenes of sales and wanted to get involved.  Then when I had a (product) marketing job I watched what the Comms team were doing behind the scenes of everything and wanted to get involved. I've reconciled with myself that my languages degree is now extremely useful as it makes me think about words and how best to use them.

It helps to be inquisitive, instinctive and I think it helps to be a 'people person' - it's a bit overused, but you notice it when someone isn't. I mean really showing an interest in people naturally. I'm one of those people who would ask a follow up question to 'did you have a nice weekend' as I genuinely want to know. This helps you get the whole picture if you're creating a campaign or writing a piece of copy, for example.

I think the main one is that people don't really understand what we do. Someone once said to me that marketing is 'just common sense'! That leads to people coming to you with ideas that often don't fit in with the overall brand concept or strategy that's been properly thought through and exercised over many years.

Teleportation. Or a segway. We're on a 75 acre site and it often takes about 10 minutes to go from one meeting to another!

I sit on the senior leadership team at the school and the team has quite a good presence. I encourage them to get involved in extra-curricular events so they get known, and we're always instilling in all staff and students that they're brand ambassadors for the organisation whether they're at school or not, so I think the perception is a good one.

Being unflappable, staying calm and always looking for a solution to things.

Data is king, so as much data as you have is always useful - it's our job to translate it and make it easy to digest. That's one of my favourite things to do. I'm a big fan of infographics.

It's difficult to think that anything's going to change as rapidly as it has in the last five or ten years with social media, forums, and generally just always being contactable in so many ways that suit different people.  Artificial Intelligence is something we should embrace further, even at a small level. It's only going to make life easier.

Holly Langley on digital poverty and building a community

Alana Genge on creativity and 'juggling' in comms