Jill Spurr on mixing the academic and creative 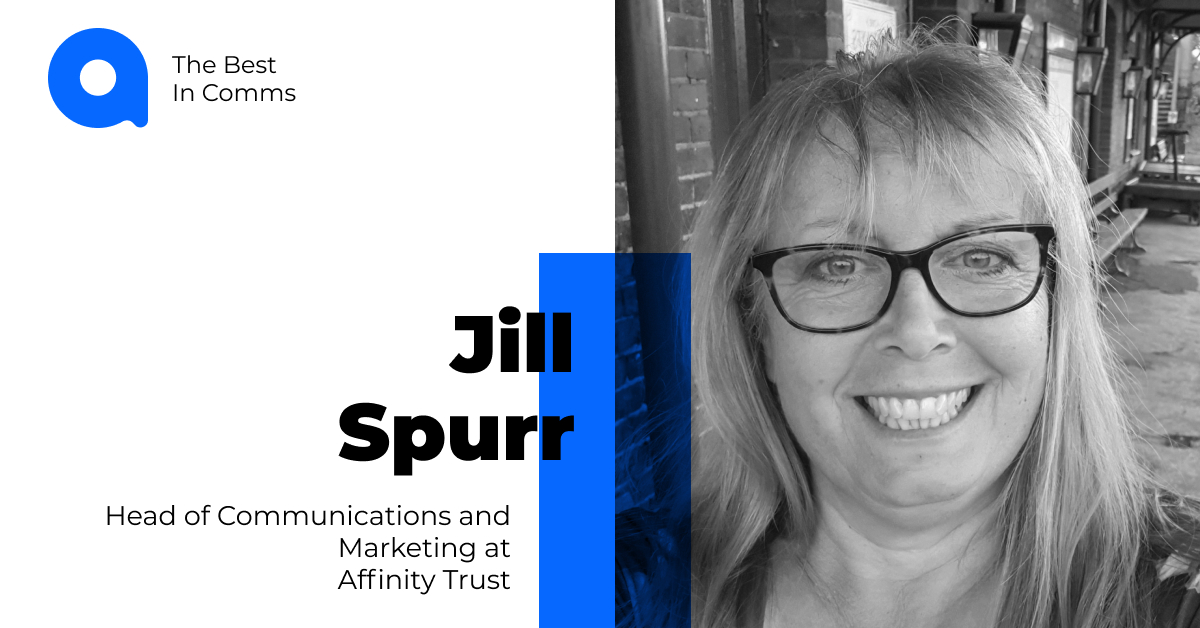 Jill Spurr, head of communications and marketing at Affinity Trust, shares with us her moving and heartfelt journey into her career.

I fell into it really. After being made redundant from Marketing Assistant at my local news group, I was headhunted back in as Digital Publishing Manager (originally called New Media Manager, that’s how long ago it was!) which gave me an amazing foundation in digital from an early stage. After taking that role as far as I felt I could, a very clever recruitment consultant decided I would be a great fit with a new housing association she was working with, so I joined Vale of Aylesbury Housing Trust as a comms officer.

But at first, it was really just a job I enjoyed and that fitted my lifestyle and funded my hobby, dog training. Then in 2016, my sister Joy was diagnosed with lung cancer. She was diagnosed in August and died in November. I was at her side. It was particularly poignant for me because she was the same age as our Mum was when she died (just 55) and my niece was a similar age to me – it was like history had repeated itself.

Seeing someone take their last breaths changes you forever. When I started to come through the overwhelming flood of grief, I looked on my life with new eyes. I recognised that I had settled for many things long before Joy even got ill. I’d lost my colour and ambition and hadn’t noticed. I was also the last female role model in my family for my niece, and I realised I couldn’t encourage her to take up space with any authenticity if I didn’t do it myself first.

So I guess I set about regaining ground. I did a level 7 diploma in crisis comms, became chartered with CIPR and learned everything I could about the science behind comms. I’m a bit of a geek and I love learning why things happen the way they do. I’d been training dogs (using modern, humane methods) as a hobby for nearly 30 years too, and there are parallels with the science that lies behind behavioural insights, so I think that helps me grasp concepts quickly.

Plus I think communications is an amazing combination of creativity and science, so it appeals to my arty side as well as my academic brain. I wish I’d known it was a career option when I was a kid.

‍What personal skills or attributes do you think are most important in the communications sphere? Why these skills/attributes in particular?

‍Authenticity definitely. I think that means knowing what you are about, what you stand for, and your work comes from that place too. I know I couldn’t produce an effective campaign for something I don’t believe in.

Courage has been a big part of my career too, even when I didn’t think I had it! Whether that’s courage to try something different, to take a risk, speak truth to power, keep going or be the only one doing something – it all starts with courage.

And it took me a long time to realise the power of vulnerability too. It’s by being vulnerable that I’ve built a network of professionals that support me, because by being vulnerable, we draw people to us. That support could be offering me professional advice or holding me up when times are tough. And vice versa – I help them. In retrospect, I can see how isolated I was as a comms professional originally; I’ve become a much better practitioner for having a network of people in the sector. More emotionally resilient but also more skilled, because you are learning all the time from the people around you.

I’m new in my current role, which has been created following restructure, so I am effectively building a new comms function that is bringing internal comms, engagement, stakeholder comms and marketing together, and all in a completely new sector for me (Affinity provides support workers for people with learning disabilities and complex needs). So yes, that’s a challenge in itself!

One of my priorities is to grow the reputation of Affinity Trust – it is a large organisation doing some amazing work but isn’t as well-known as it should be.

I think the biggest challenge is also the biggest opportunity, and that’s representation. I’m working with a fabulous team to ensure that the people we support are front and centre of the decisions we make, involved in the process. Not all disabilities are visible, and no one should have to give their medical history or wear a sunflower lanyard before they are seen. While there has been progress, the stereotypes and assumptions about what people can (or more often, can’t!) do still abound, so there is a long way to go.

‍What one thing would make your working life easier?

A mahooosive team because there is so much to do!

‍How is the role of communications perceived in your organisation?

My colleagues at Affinity Trust really see the strategic value in communications. The function sits in the Development and Innovation directorate, which is really the engine for growth and progress, and communications is very much central to that. I work closely with all the directors and heads of service, and I am valued, trusted and respected. I couldn’t really ask for more.

Work with something you believe in, and that means starting with yourself.

I’ve had a bit of a journey with Imposter Syndrome, and not really believing in my own value or skills. It’s very isolating, but when you finally open up about it, it’s amazing how many talented people feel the same way.

Last year, I wrote and presented a workshop on Imposter Syndrome for Comms Unplugged. It was a joy to give something back to them because they have been so integral to me becoming the comms professional I am today. As part of it, I devised a little exercise that demonstrated that we would never talk to a colleague the way we speak to ourselves because it’s so unkind. It’s quite a moment when that particular penny drops, something I’d learned the hard way.

It’s quite amazing what we are capable of among all the negative. If we applied the same energy to developing ourselves as we do to running ourselves down, we would be capable of even greater things.

Happiness. Perhaps one that’s more for internal communicators, but every workplace should be measuring happiness and using emotional intelligence to develop internal strategies.  It’s critical to wellbeing, can flag up weaknesses in culture and identify where improvements can be made. We don’t work in Victorian workhouses – the idea that we are fundamentally happy in what we do shouldn’t be considered daft, we spend a significant proportion of our time at work. Yes, of course we all have good times and bad times, that’s normal, but if workplaces were more empathic and we were more acute to when a job is no longer fulfilling, workplace stress could be massively reduced.

And if that’s all too hippy dippy, then tell your Executives that happiness makes good business sense. We are significantly more productive when we are happy, over 30% more! But for goodness’ sake measure it to understand and respond, don’t write targets! Goodhart’s Law applies in spades on this one.

Novel environments for events. The pandemic has reframed the work environment, but even prior to that, some businesses were adopting agile and really reconstructing what a head office looked like – Halton Housing for example. The logical next step is the learning and meeting environment, and with in-person events now allowed and businesses having to adapt to recover income and explore new markets, there is a huge opportunity for some interesting spaces to offer up for conferences and events – which equals great potential for comms professionals organising events to find unique venues with wow factor!

Much like lockdown revived the value of print and mail, I think lifting of lockdown will reinvigorate in-person gatherings, but with more emphasis on the whole experience. An evocative venue that engages the brain and senses before a word is uttered is a gamechanger for the outcome of an event.

Tina Sharma on the primacy of listening