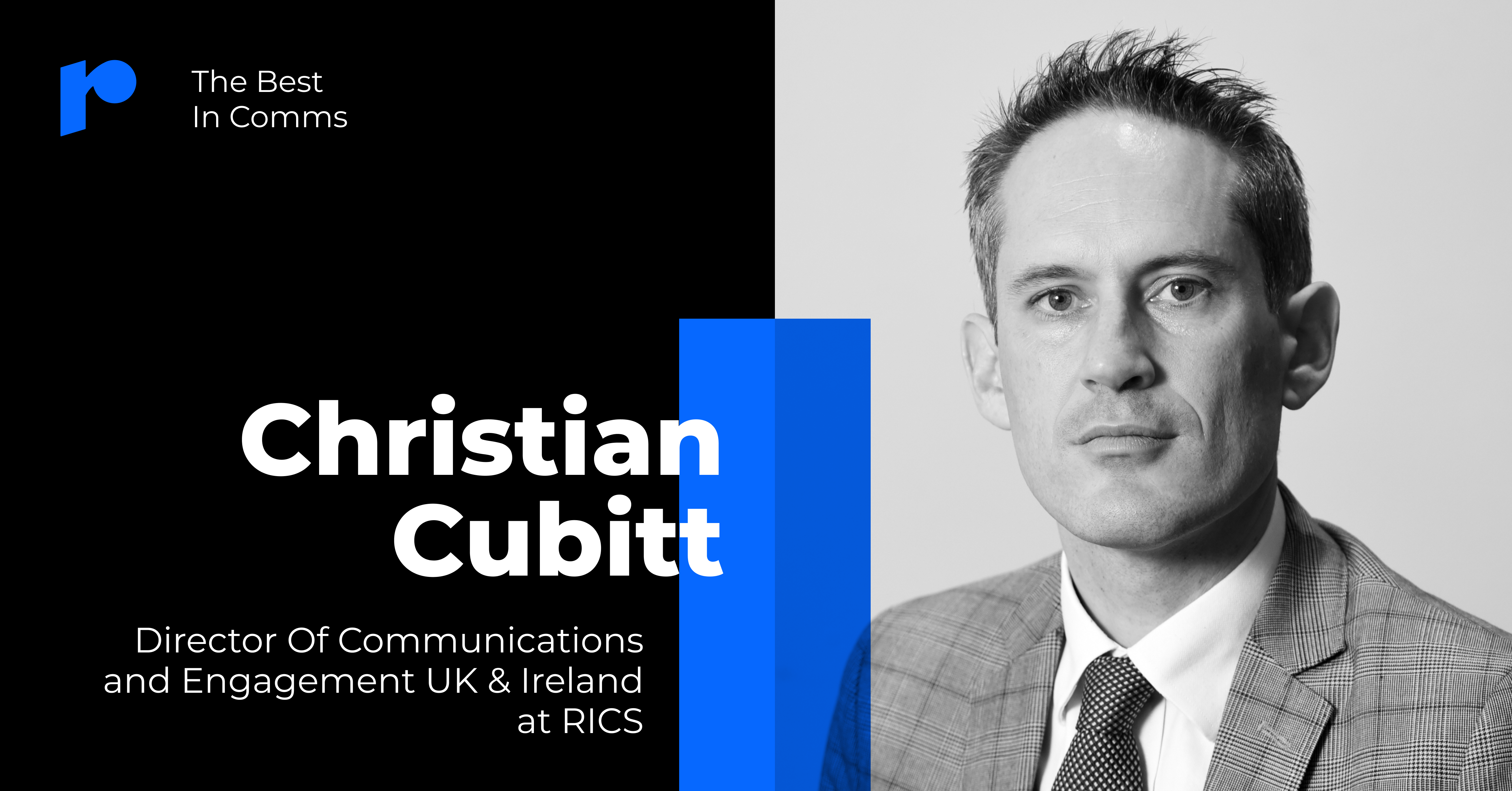 Christian Cubitt, director of communications and engagement at RICS, joins us for a chat on the incredible places comms has taken him, as well as his tips for an aspiring professional.

Christian Cubitt, director of communications and engagement at RICS, joins us for a chat on the incredible places his comms career has taken him, as well as his tips for an aspiring professional. Read on for Christian's fascinating responses.

If I’m honest it was by complete chance. I left University having completed a Masters in European Political Economy and with a vague notion that I wanted to do something related to Government, though didn’t really know what. I was offered a place on the graduate training scheme for Hill & Knowlton and ended up working in the corporate technology practice there, which gave me a solid grounding in communications and was hugely enjoyable. I stayed for about 18 months before leaving to become a government press officer in what was then the Office of the Deputy Prime Minister. And the rest, as they say, is history!

What personal skills or attributes do you think are most important for a communications role? Why these skills/attributes in particular?

The best communicators are those that can listen. The most successful campaigns — whether in the political, the corporate or the consumer world, are those that really tap into what their audience wants and to do that you have to have listened and understood first. That ability to listen also requires the need to be flexible — to have heard what your audience has told you and where necessary change approach, especially when what your audience is telling you is not something you (or your business) wants to hear!

All communications professionals will have experienced at one time or another the challenge that everyone else knows how to do their job. Whether its creating content for a campaign, writing a press release, speech or line to take, there’s always a technical expert who wants to rewrite your content to make it far more esoteric which invariably won’t then land with the audience. There is also the challenge that when you work on large high profile issues, everyone has an opinion on how you are doing your job. Having spent time (on three occasions) working in the Prime Minister’s press office at No10 you become very attuned to the fact that everyone will tell you how you could be handling an issue better, making a more persuasive argument, or generally not being so useless! The trick is always to distill down the commentary into those pieces of genuinely meaningful information which you can use to refine your approach.

Firstly, seize every opportunity that comes along. I’ve seen a real growth in secondments, internships, placements, and so on during my career. They are hugely beneficial and can teach you new skills, build new networks, and open up whole new avenues that you hadn’t previously considered. And secondly, and most importantly, enjoy it. Communications is a hugely rewarding and enjoyable career path which allows you to do some incredible things. Over two decades I’ve played war games on aircraft carriers in the English Channel, briefed the parliamentary lobby in the heart of Westminster, had front page stories (good and bad), been to refugee camps in Lebanon, and dined with the power elite at Davos — there is never a dull moment!

Be ready for anything!

Always listen to your audience. They know what they want to see so make sure you know what content they actually want to engage with rather than what you think they should be looking at.

Sarah Roberts on balancing urgency and strategy in hectic environments

Benjamin Holman on cutting through the noise and avoiding information overload