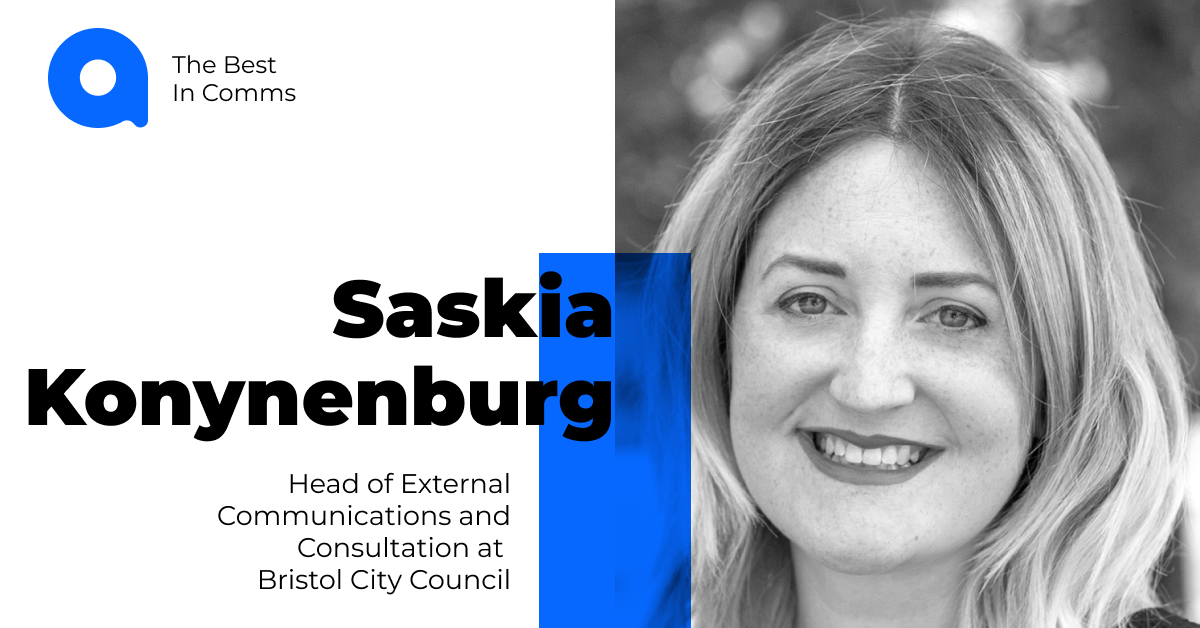 Saskia Konynenburg, head of external communications and consultation at Bristol City Council, joins us to chat about the importance of reacting to audience behavior and analytic insights.

I trained as a journalist and did some freelancing in the UK before traveling to New Zealand and working there as a reporter. When I returned to London in 2008, two major things were against me; firstly it was the middle of the financial crash and thousands of people were made redundant, and secondly the internet was taking off so news outlets were pivoting to more online content. The upshot was newsrooms were being obliterated and I began to feel very disillusioned – I felt that only those who could afford to live on a low wage could be a journalist in the city. I turned down a £13k a year reporter job which barely covered my rent to take up a role as a Media Assistant for a quango. Initially I felt like I had sold my soul and I really missed the excitement of the newsroom, but my recent comms roles couldn’t be more interesting. I reflect now that it’s the best move I ever made.

It really depends where you work, but I’m a busy person so working in a complex organisation with multiple deadlines really suits me. In this environment I’d say you need to be resilient – you often have to juggle a lot of conflicting priorities and turn things around quickly. If you’re easily flustered working in public sector comms, particularly in a political environment, isn’t for you. Comms people also have to be influential and persuasive – everyone thinks they know how to do comms… they don’t!

Meeting fatigue - I’m forever turning down meetings I don’t need to be at. A good comms person can quickly pick things up and put things down, they don’t need to sit in four hour long technical meetings. Instead I try and advocate for comms briefings and treat those a bit like an interview – asking lots of questions you think the public or journalists will ask. Comms people need to be able to quickly turn information around, and be comfortable not being a subject expert, but knowing enough to make sense of it all for the audience.

A greater understanding that a press release does not constitute good comms. I’d like to see much better time investment in audience/behavioural insights and time allocated for proper evaluations. Too often people adopt a spray and pray approach where they keep chucking out lots of comms in the hope that if they say it enough times the right person will listen. In the long term investment up front would yield much better results.

We have huge demand for our support, so it must be viewed well, and we’re always stretched for capacity. We’ve worked hard to show the value of engaging with us early on so we can offer reputational management advice from the outset and avoid clangers. It can still be quite service led, with non-comms colleagues telling us what they want. I’m hoping to empower my team to push back more and trust their own expertise.

Blagging. Or should I say confidence. Confidence to hold the line when you need to. Confidence to push back. Confidence to trust your instincts. And most importantly being confident when you don’t always have the answers – but of course, never revealing that.

I think we need to start with making sure the objectives are right. I spend too much time eye rolling when I see evaluation against objectives that are irrelevant but sound good to clients – e.g. social reach. It only matters if you reach the audience you intend to – unless of course you’re after world domination…

Depends on the sector – in the public sector we need to work harder to engage people while budgets continue to be squeezed. As a sector though we’re woefully behind with digital comms… most comms are still not created with a digital first approach. Forget the crystal ball - give me a genie in a bottle and my wish would be to bring public sector comms firmly into the digital age.

Nick Chowdrey on getting people up to speed on digital