Pia Dawson on being excited by change 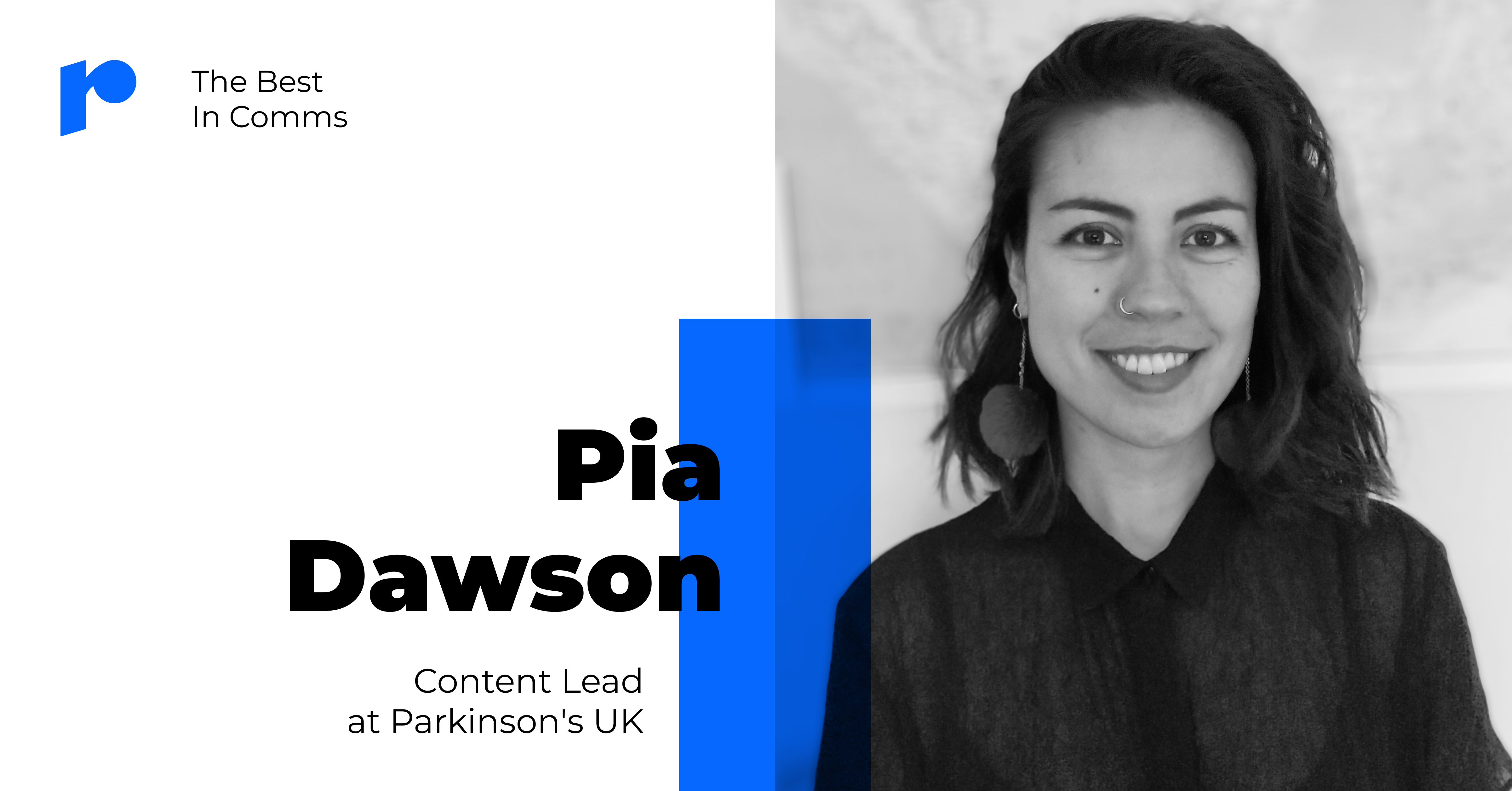 Pia Dawson delves into why being a perfectionist is a hindrance, not a help, and shares insight into being an outstanding communicator.

Pia Dawson, Content Lead at Parkinson's UK, delves into why being a perfectionist is a hindrance, not a help, and shares insight into being an outstanding communicator: distilling complex ideas, and expressing them in a way that other people understand.

I didn't study communications. I accidentally started a graphic design degree and then quit to study international relations. My first jobs were in organisations focused on human rights and peacebuilding.

While I've stayed in the nonprofit sector, I quickly realised that I enjoy communications more than the policy and advocacy side of things. I love the craft of writing, and more generally the process of taking complex ideas and giving them structure, pulling out a persuasive argument. I get a lot of satisfaction out of making things as clear and accessible as humanly possible. And despite being an art school dropout, I still want to be creative.

So I gravitated towards digital comms, and was really lucky to have a brilliant manager in my first digital role. He instilled in me some of the fundamentals of web design and digital strategy that I still refer to today (eg "the general public" is not a target audience; design for humans not search engines; and Steve Krug's maxim "Don't make me think"). That was over 10 years ago, and digital has evolved a huge amount since then - but that's probably why I enjoy it so much.

Fundamentally, good communicators are able to put themselves in their audience's shoes, and make decisions based on how those audiences will respond rather than what they want to say. This is obviously key to any engagement or communications strategy. But it's helpful if it also comes naturally. (My husband reckons I cheat at Articulate by secretly memorising all the cards, but I just happen to be good at getting my teammates to understand things really quickly!)

It also helps if you're the kind of person who's excited by change, and always up for learning something new. This sector changes so rapidly that there's always a danger of getting stuck in a rut if you don't adapt. When I think about my own journey from "online communications" to content strategy, every move I've made has been a bit of a step into the unknown. It forces you to get out of your comfort zone and learn and grow.

Linked to this, I'm increasingly finding that being a perfectionist is a hindrance, not a help. It used to be the opposite: my perfectionist tendencies meant I was very good at getting my head down and creating a polished final product. I've had to unlearn this and get used to sharing a "minimum viable product", to working more collaboratively, and to testing and adapting. My work is undoubtedly the better for it, but this is definitely a skill I've had to cultivate.

Resourcing is a constant issue. I always seem to be joining a team that's not quite fully formed, and having to make a business case for greater expertise and capacity. Both as a digital manager and a content lead, I've needed to champion my discipline and show how investing in it pays off in terms of impact. It's a challenge, but also a great opportunity to build and shape a team in a sector that's evolving fast.

In the past, I think the biggest challenge I've experienced has been the perception of comms at senior levels or among other teams. Comms has been seen as the final stage in the process ("put this on the website" or "make it sound good/look pretty") instead of being recognised as strategically important. I've seen how this leads to siloed working and being left out of decision-making.

Doubling the size of my team! I joined Parkinson's UK in 2019, in a new role at the charity. Since then my brilliant team, and our constant efforts to champion content, have meant that the value of content strategy is recognised quite widely. But in doing so we've created a lot more work for ourselves.

It's recognised as absolutely core to achieving our strategic goals. That's a big part of why I wanted to work here. Coming from a background in digital comms, I'd often faced a bit of an uphill battle trying to be included in strategic decision making. But Parkinson's UK is much further along in its digital transformation journey, so I've had the opposite problem. As I mentioned, my team's skills are now in massive demand, and we lead or support so many projects that we're actually stretched too thin.

Being adaptable and audience-first, as I mentioned earlier. But there's also something about being a clear thinker. Orwell said, "If you cannot write well, you cannot think well." Which is probably a bit reductive, but being able to distill and synthesise complex ideas, and express them in a way that other people understand, is really important.

This applies to translating research into policy, which was the focus of my last job, and of course to making complex medical information and science accessible, which is a big focus at Parkinson's UK.

But more generally, it's a valuable skill in the workplace. I'm finding that as we start to work in more integrated ways and break down those silos, there are more and more opportunities for confusion and talking at cross purposes. I'm trying to get better at being the person in the meeting who isn't afraid to ask the "stupid" questions. Because 9 times out of 10, I won't be the only person who needs clarity or is baffled by a bit of unfamiliar jargon.

Well there's a lot we shouldn't be presenting. I don't just mean vanity metrics, which obviously we want to avoid. There's also the temptation to be led by the data we have, rather than the data we need (which might be harder to find, and exist in multiple places). So it's important to keep focused on our strategic goals, and to pull out whatever shows real impact and can be used to drive action and change.

Hmmm... I think my crystal ball broke in the first few weeks of the pandemic :)

Laura Dewis on learning from failure