Mark Williams on a positive and stable mindset 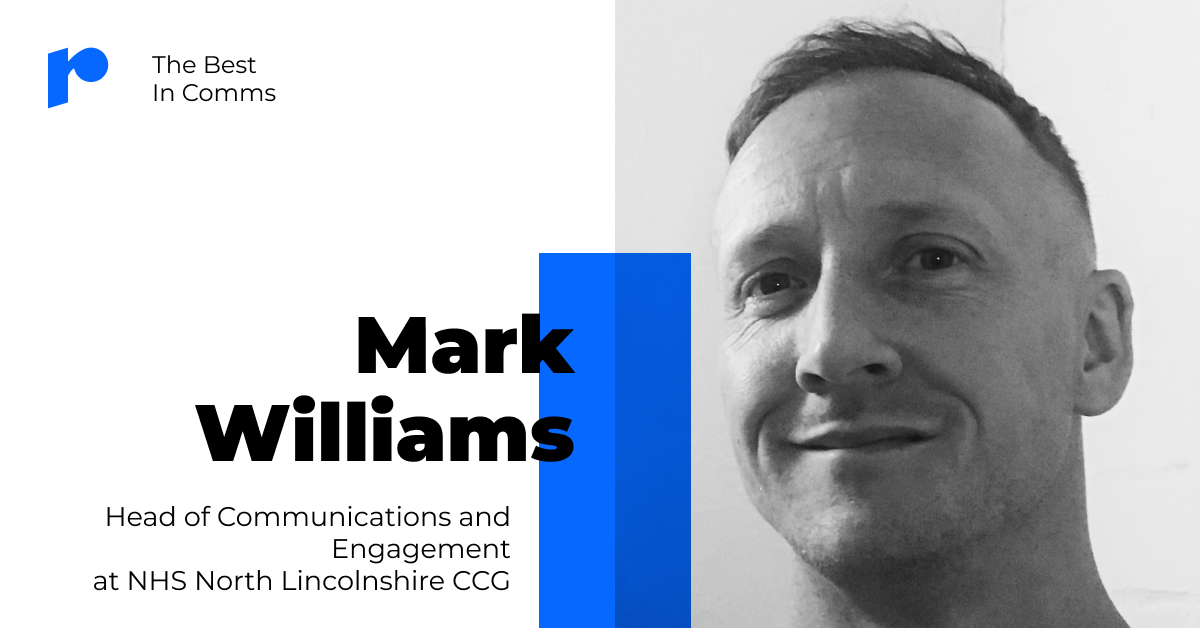 Mark Williams, head of Communications and Engagement at NHS North Lincolnshire CCG, chats about the many skills attributable to comms success, including mindset, adaptability, and planning.

Actually, my passion was journalism. I enjoyed exciting roles at a number of regional newspapers and in some fantastic cities such as Lincoln, Hull and Nottingham.

Over time, journalism was changing. Some brilliant journalists and good friends were leaving the industry and, coupled with the birth of my daughter Betty, I decided to opt for a communications role in the NHS because a) it was closer to home and b) I thought it would be less hours. How wrong I was with the latter!

I had no idea what to expect and, if I’m honest, probably viewed it as a temporary measure while learning the ropes of parenting. But I have grown incredibly passionate about the role and proud of the NHS and everything we represent.

There are several. The ability to embrace every challenge with a clear mind is vital. It isn’t easy when we are juggling so many competing priorities and I’m still working on this myself! Listing your priorities each day is crucial. Realistically, what can you tick off first to build momentum? I have also learnt to reduce the number of bullet points on my daily to-do list. Focus on doing a handful of the most important tasks to the best of your ability. This, for me at least, works better than having a long list, achieving 75% of it and to a lower standard, and then feeling like you’ve not achieved what you set out to by the end of the day. When you have decided what really matters that day, make them count.

A strong, positive mindset is key. Communications is one of those roles that everyone thinks they know best. Sometimes, it can be the area of work that is scrutinised if something wider than that hasn’t worked. You need a strong mindset and resilience to deal with these difficult conversations. And the positive mindset is needed because I passionately believe we can make a difference. In the NHS, and especially during a global pandemic for example, my mindset has simply been that every message we cascade is done so with the aim of saving a life.

You must be adaptable to both situations and people. We come across dozens of different characters and personalities every week. To get the best from them, we need to adapt to their style. So of course, people skills and being able to strike up a conversation is important. Never underestimate how developing relationships can help you when you need to influence stakeholders. Equally, priorities can change very quickly – sometimes multiple times in a day. Sometimes we need to park an important piece of work and shift all attention to a ‘breaking news’ scenario.

You can’t always teach energy, passion and work ethic – but I firmly believe in it. If I was asked to list my talents, I would struggle to think of anything. But I work hard and with enthusiasm to make up for that.

A well thought out and structured communications plan, with the ability to adapt or change approach when needed, is of course important. But all too often I see productivity and results thwarted by people waiting to see the plan. In some instances, I have seen plans take months to be developed and then weeks to be approved. By which point the opportunity has gone. Sometimes you just need to do it.

Lots of people see themselves as communicators. I have learnt to let people have their say, take on board what they are saying and then demonstrate the team’s expertise in the matter. I always back up any method or decision with facts and data.

Resource. The team has so many exciting ideas regarding better ways to communicate and engage with our public but it just isn’t always possible without a larger budget/a bigger team. I’m sure that is the case for many and it’s actually a pressure a quite like in a way – that underdog tag I suppose. But I am immensely proud of what we achieve in North Lincolnshire. It often takes working into the evenings and some weekends to make that difference, but it’s worth it.

I am extremely lucky to have a supportive executive team that understands the importance of good communication – whether that is to staff, key stakeholders such as MPs and councillors or our wider general public. If anything, that support has only strengthened during the pandemic because clear communications has never been so vital.

I am also lucky from a media perspective. As a former journalist, my approach with the media can be different to others. Building relationships with the media, whether it is in print, online, radio or TV is extremely important but, of course without willing clinicians to be the face and voice of the organisation, my strategy is nothing. Fortunately, our GPs embrace the opportunity the media brings to broadcast important messages. And they’re absolutely brilliant ambassadors.

Relationships. You need to build trust with as many key stakeholders as you can.

And don’t stop asking questions – however annoying you may feel! We cannot clearly communicate effectively if we are not clear what it is we are talking about. A good way of doing this, rather than asking 32 questions during Any Other Business, is by catching someone after the meeting and politely asking them to add clarity to anything you’re unsure about. Over time, you will realise you’re not the only one who is unsure about something. The good thing about that is asking the questions becomes easier!

I think measuring our success is vital. I will often hear ‘I’m not on Facebook,’; ‘I’m not on Instagram’ or ‘I don’t read the local newspaper’ so it’s important to take each communications initiative and measure its success overall. So you can go into a meeting and you can breakdown all the data – with a combined audience at the end. I also find a short reason as to why we use each channel is helpful in explaining why we do what we do. So why Facebook? What is the difference in audience demographics between a newspaper reader and an Instagram user?

So when you add up audiences from Facebook, Twitter, Instagram, the local paper, its online edition, radio listeners and TV viewers, you actually have a pretty impressive overall reach.

If it isn’t already, then it needs to be equality and inclusion. It is very easy to forget that there still remains a really important minority of people who do not have access to the internet or a computer. That doesn’t mean they should be forgotten.

More effort needs to be taken to engage, meaningfully, with our seldom heard groups. We have made great strides to address this in North Lincolnshire and we are in a better position than we were. But there remains much work to do and many relationships to be built across our wonderfully diverse population.

Amy Kirk on the trends of the future

Alison Lawton on being visible, doing your research and not taking things too seriously