James Miller on learning to stay ahead of comms' rapid evolutions 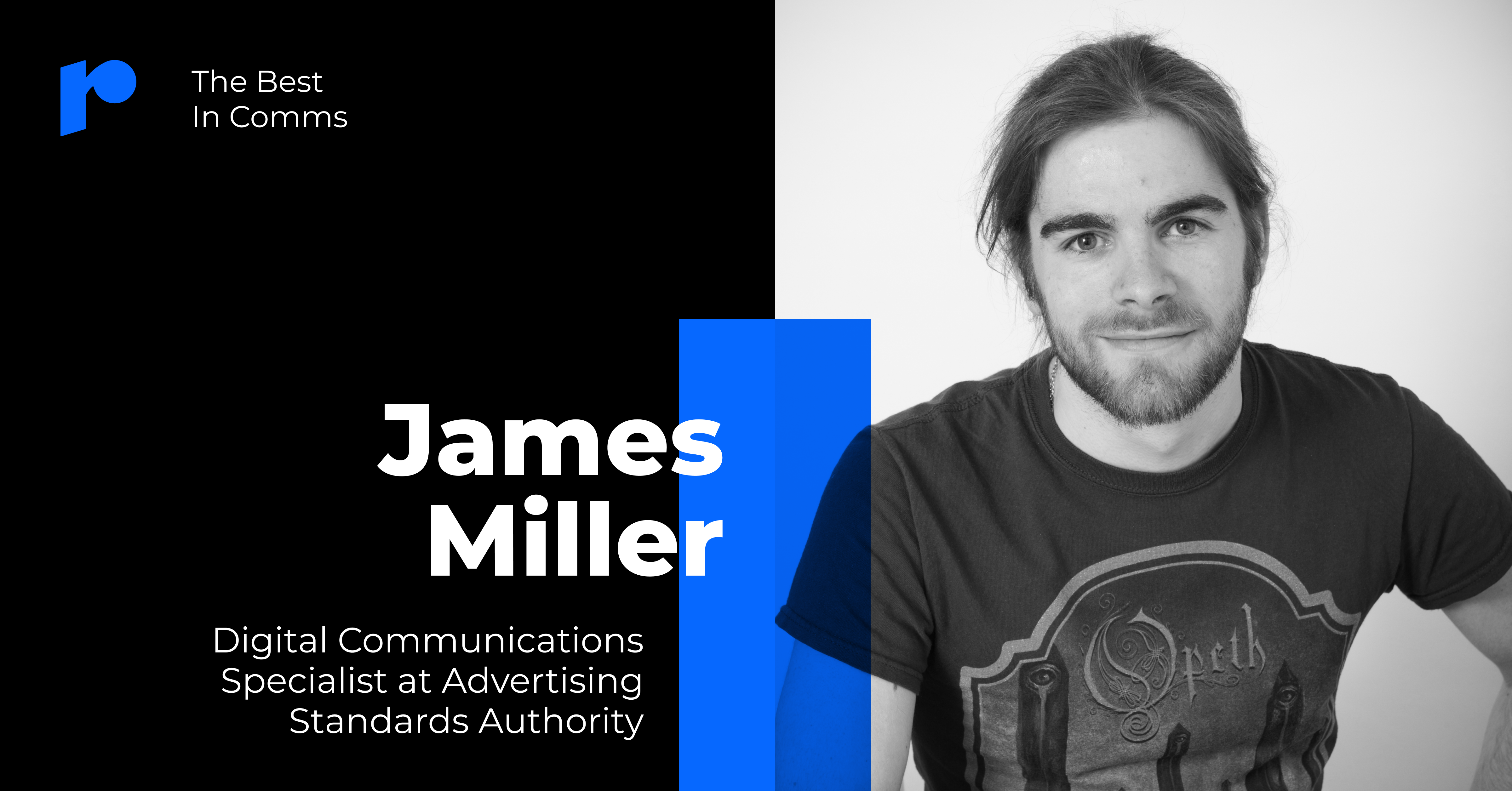 James Miller, digital communications specialist for a UK regulatory body, gives us his humorous and thoughtful take on modern communications. Read the interview for a sense of how he's approached the many duties of a comms role, fought for new techniques over the outdated, and used the Oxford Comma.

I studied English Literature and Language at University primarily because I was good at it and thought it a general enough degree to leave a lot of doors open when I moved into the job market. I’d thought I might like to try journalism for a career but the changing landscape for writers in terms of the shift from staff to freelancers put me off. It was only once I’d entered the corporate world that I became aware of ‘Communications’ as a discipline. When I saw a junior comms role being advertised within the company I worked for at the time I leapt at it and luckily got the job!

What personal skills or attributes do you think are most important for a communications role?

Versatility, people skills, and an eye for detail. And a strong opinion on the Oxford Comma (Editor's note: Always use it!).

Why these skills/attributes in particular?

I’ve known many communications colleagues who spend so long thinking about the message they forget about the audience, but the audience is far and away the most important piece of the comms puzzle. Being versatile and building far-reaching networks of people really enables you to get to grips with the best ways to reach people with whatever message it is you’re trying to convey. And of course, the eye for detail helps avoid the terrible typos of doom!

What sort of challenges do you face in your role?

Two things come to mind. First, getting companies to not only agree to but implement plain, clear language into their communications output. I’ve predominantly worked for companies that love to use legalese, jargon, and acronyms. It blows my mind how companies can wonder why their messages aren’t landing with people when they’re communicating like members of the 18th century judiciary.

Secondly, resistance to innovation. The world is evolving faster than many organisations can keep up with, and I’ve worked in a few companies where you would quite regularly hear the phrase “but that’s how we’ve always done it”, as though that were a good reason to do anything at all.

Is there a particular challenge that you experienced in the past that stood out?

Once, while working in a fairly junior communications role, I was approached by the CEO of the organisation I was working for, as she had received advanced notice of the organisation’s results in a national employee satisfaction survey. The company had done quite well and she wanted me to put together a special staff magazine that gave colleagues’ views on the questions: “why do you like to work here, and how can we make it even better?” I was told I had six working days to canvas every team for their answers (over 60 of them), take dozens of photos, interview senior leaders within the company, write a foreword on behalf of the CEO, and then design, edit, and print copies to distribute across the company.
I don’t think I’ve ever worked on anything before or since that was at once so stressful and yet so much fun.

Communications is perceived quite well at my current organisation. It is seen as a necessary department within the organisation, and one that does an excellent job of raising awareness of who we are and what we do across the UK.
With that said, there is still a tendency to view Communications as the last link in the chain when it comes to mid-/long-term work. Sometimes we will be told about a policy announcement a week before it’s meant to be published and told to “Comms it”, rather than being involved at every step of the work as we should be!

Learn, learn, learn. This applies most obviously to the communications discipline but certainly isn’t limited to it. Yes, you should learn about crafting a message, multimedia creation, or how to analyse engagement data. But Communications is also a broadly applicable skill set that will enable you to work in just about any industry or sector, and the way to shine within those sectors is to keep learning and honing your own knowledge.

I think in the modern era one crucial aspect to being successful comes from knowing how to harness data. In ‘the old days’ it was tricky to know who was reading your magazine, or seeing your billboard, and it was great to have good instincts about your audience and how to reach them. But now we can see who engaged with a post, how long people spent watching a video, what websites a user visited before landing on your blog. All of these things combine to form a treasure trove that a keen-eyed communications professional can use to inform just about everything they do.

It’s all about data. When you can look at analytics platforms to tell you how your messages or posts were received, you can iterate and continuously improve. If people aren’t clicking through from your email marketing or social posts onto your website, maybe your ‘calls to action’ aren’t clear enough. If your latest video sees massive drop-offs half way through, make the next one shorter or more eye-catching.

One small caveat applies here though; it’s all relative! When megastars can get a million ‘likes’ on a photo of their lunch it can be disheartening to work on a media campaign that only gets hundreds or even just dozens of engagements. But always be looking to improve upon your own baseline, rather than strictly comparing yourself to everyone else.

Ross Wigham on change, disruption and why frontline staff should be at the heart of NHS comms

Tim Percival on carving time out for thinking